How do you get two Whales in a BMW M3? 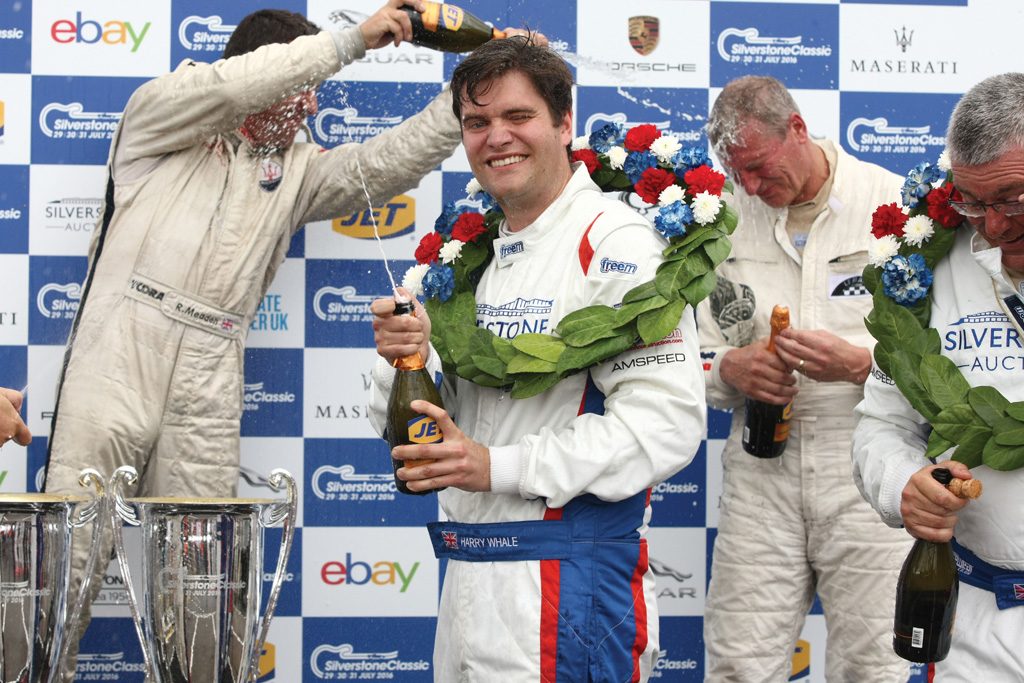 Driving the Auto Trader BMW E30 M3 he raced in the 1991 British Touring Car Championship, Nick Whale and son Harry – a small child attending races when the car was new – emerged victorious as arguably the most eclectic mix of machinery at the 2016 Silverstone Classic contested the 45-strong Historic Touring Car Challenge. For cars of a type raced between 1966-’90, it certainly impressed the Sunday crowds, evoking memories of Tourist Trophy races of yore.

Whale Jr’s maiden race win was not only a personal red-letter day but more importantly a poignant moment for the family. “To win with your son is fantastic, a very special feeling,” gushed Nick, who hillclimbed a Mallock in his teens and whose Silverstone Auctions company had enjoyed its best sale yet on the Thursday evening.

Friday’s qualifying session had suggested that the quickest M3s prepared by Arran Moulton-Smith’s Amspeed equipe, based nearby at Brackley, would take some beating. Team-mate Mark Smith’s 2m24.020s (90.97mph) best lap of the Historic GP circuit pipped the Whales to pole by 0.026s, but sadly Smith’s ex-Bigazzi car was withdrawn following engine failure in the previous afternoon’s Super Touring race, thus the pack was reshuffled. The wailing Ford Capri – a Ric Wood-built ‘Cologne’-inspired evocation, powered by a 3.4-litre GAA V6 engine – of Grant Tromans/Richard Meaden qualified third, also in the 1m24s. 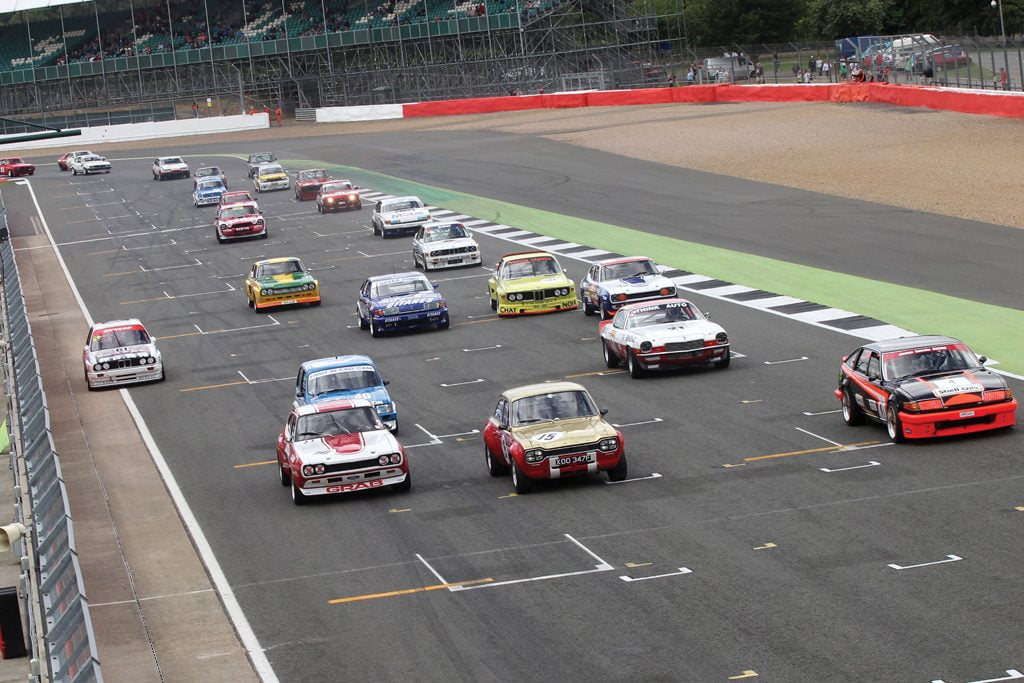 David Tomlin bought the ex-Mark Wright Klaus Ludwig tribute Escort RS1800 at the Silverstone Auctions sale, then – with officials’ blessing –entered it for the race the following morning! With no prior experience of the Cosworth BDG-engined machine he qualified it ninth, ahead of Ric Wood’s new GAA-powered Capri, presented in a predominantly green and white Liqui Moly/Nigrin Autopflege livery borrowed from one of Zakspeed’s ultra-low Gp5 tubeframe DTM Capris of the late ’70s.

Three sizzling MG Metro Turbos were out together for the first time in historic events, returnees Patrick Watts/Nick Swift – who started from the back following a turbo pipe failure – joined by Malcolm Harrison/Paul Taft in a sister Computervision car and Till Bechtolsheimer making his front-wheel-drive debut in the Massa Real version which Armin Hahne raced in Germany. Harrison/Taft qualified directly behind Dance and the Chevrolet Camaro Z28 of Grahame Bryant. 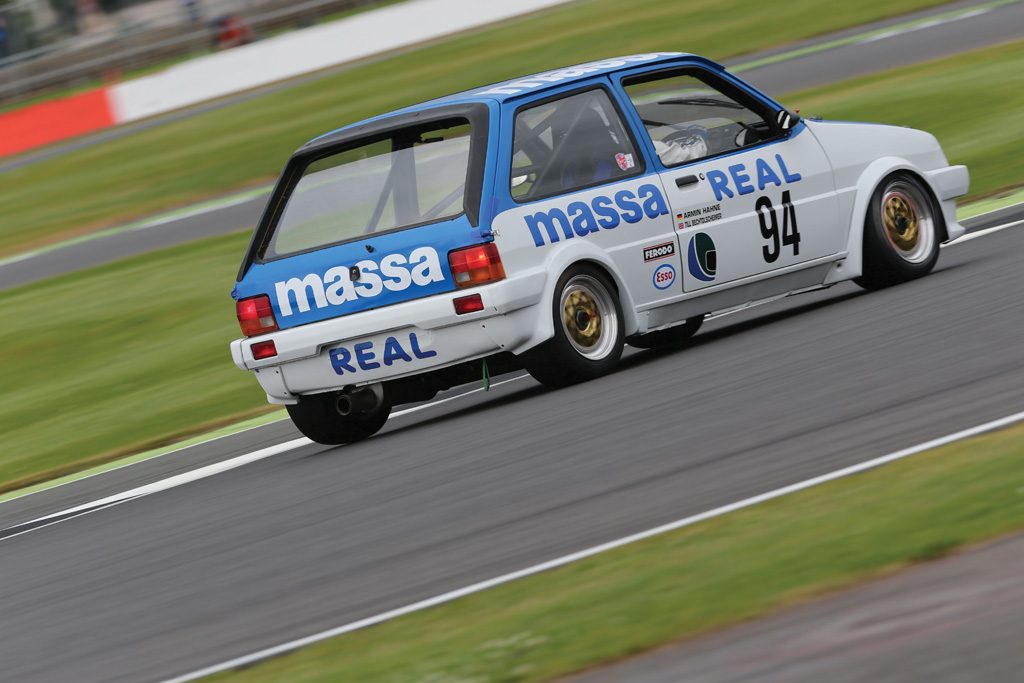 Dominik Roschmann’s magnificent primrose yellow BMW Belgium CSL ‘Batmobile’ appealed to the Touring Car cognoscenti, boasting a hallowed period history. Built up by Precision Liegeoise team chief Albert Peltier, it was raced to sixth in the 1972 European Touring Car Championship by his son Alain and Jean Xhenceval, then, with updated aero, in the ’73 Spa 24 Hours by Hughes de Fierlandt and Frenchman Vincent Gaye. 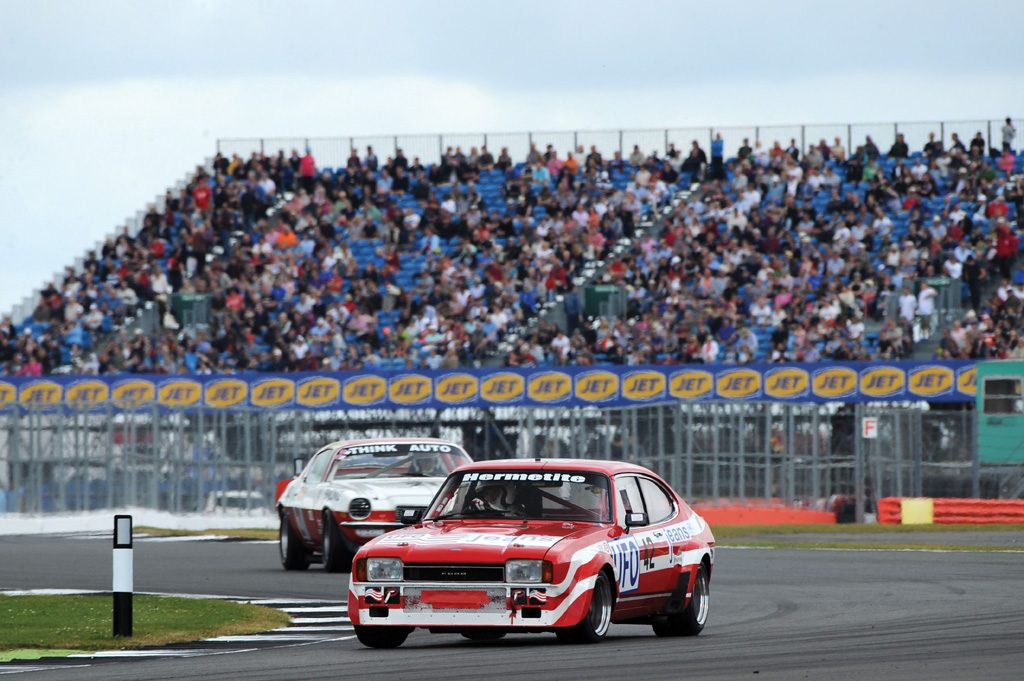 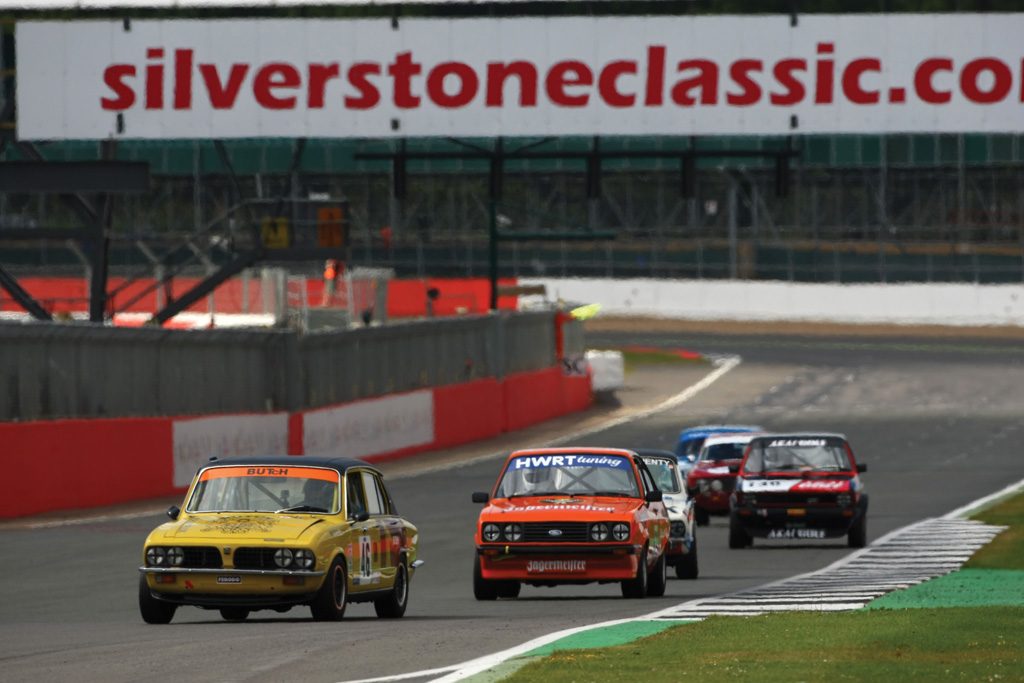 Commanding much attention down the order, meanwhile, were two more charismatic big-bangers, Andrew Strachan’s gruff Camel Rover P6 and the splendid ex-David Howes 6.4-litre AMC Javelin of Belgian Marc Devis and former Formula Palmer Audi champion and F1 test driver Jonathan Kennard. Having not turned a wheel in four decades, the former Super Saloon monster was sympathetically re-commissioned by WDK Motorsport for an emotional return to its old Silverstone stamping ground! Missing from the action on raceday, however, was Jim Morris’s VW Golf GTI which threw a rod in qualifying.

Nick Whale shot into the lead at the start – attracting a 10 second penalty for his haste – but Meaden stormed Tromans’ red and white Capri round the outside at Abbey to power ahead. Wood ran third initially, ahead of Postins, Tomlin, Pochciol, Mullen, Dance (moving up strongly in his pretty Capri), Garrett, Lockie, Mann, Chris Williams, Bryant, Roschmann and Ludovic Lindsay’s Capri.

There was drama on the opening lap, however, when Malcolm Harrison’s Metro ground to a halt on-line in The Loop. With its brakes locked solid marshals were unable to shift it. With no option but to despatch a lift-truck, a Safety Car interlude covered its repatriation. Meaden howled clear at the green, handing patron Tromans a lead of almost 10 seconds over Wood, Postins, Roschmann, Lockie, Townsend and Bryant.

With old pal Ian Guest’s Alfa Romeo GTV6 to finish, Whale Sr had already relayed his lad, while Tomlin was another to make his mandatory stop early. Mullen’s orange BMW CSL was parked out on the circuit on lap 5, but at least Watts’ Metro had crept back to the pits, for a spark plug lead to be reattached, having stopped out of sympathy near its team-mate on lap 1. It ran very quickly thereafter, but far too much time had been lost to surprised class victor Bechtolsheimer

Having seen Meaden catch an enormous tailslide at Brooklands on his in-lap – the track having been liberally coated with oil from Wood’s Capri, inevitably to retire in a cloud of smoke – Tromans trod cautiously. Young Whale tore after him with abandon, then howled his M3 past on the outside of Abbey within a couple of laps. As Harry stormed to an impressive 25 second victory (reduced to 15 by his dad’s penalty), Meaden/Tromans had to settle for second ahead of Tomlin, grappling with the unfamiliar gearbox of his ‘new’ Escort. “I kept going from second to fifth,” he said after a satisfying debut.

Postins, Dance and Garrett/Hall completed the top six, the trio covered by three seconds at the chequer, with Roschmann’s wonderful BMW on their heels. Miles Griffiths demonstrated the pace of Walker’s ex-Albrecht Krebs/Hartmut Kautz Capri en route to a promising eighth. The Williams family Rover and Luck’s BMW 2002Tii completed the top 10, ahead of Townshend’s M3 and the meaty AMC Javelin which Kennard hauled back to 12th having taken over from owner Devis. 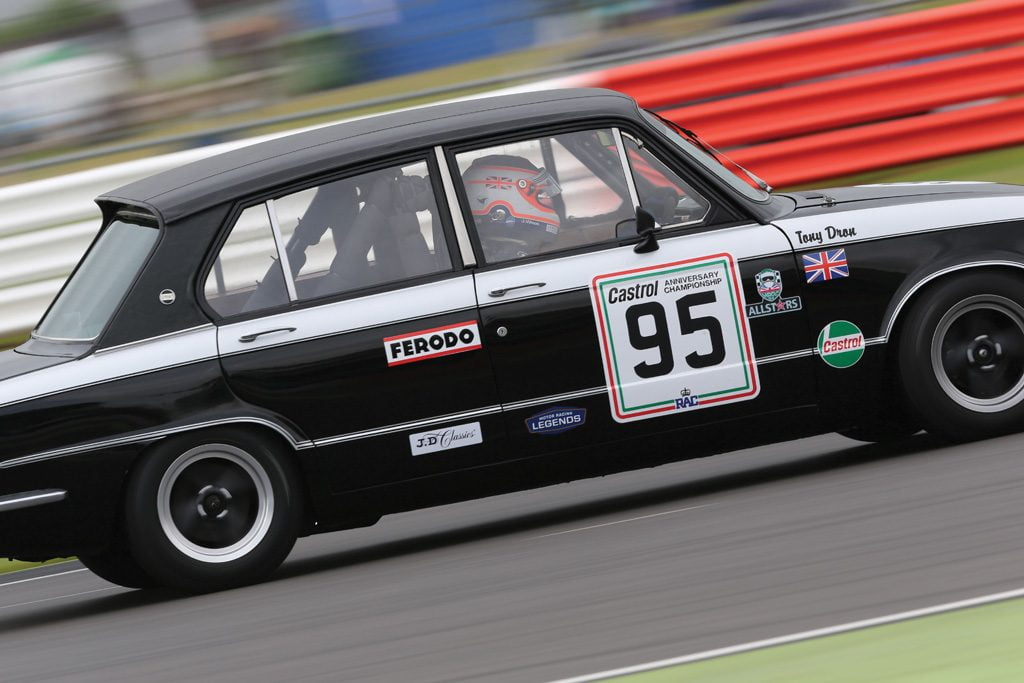 70s Touring car ace Tony Dron was on hand after the race to bestow prizes to all the winners, including the first home for his namesake prize the Tony Dron Trophy, this went to the Huff-driven Capri (in which owner Meins had a little spin after the restart) closely followed by Grahame Bryant’s Camaro (2nd) with Gary Feakins Capri 3rd overall. Other Group 1 class winners include Mark Wilson in his Volkswagen Golf driving solo after the Steve Jones stricken mini didn’t last the course. Paul Clayson in his cream and green Alfa Romeo GTV6 and James Wood who won the Group 1 Dolomite Sprint tussle, finishing two almost minutes ahead of the Butch Tailoring example of Andrew Frankel/Sarah Bennett-Baggs.